Get fresh music recommendations delivered to your inbox every Friday.
We've updated our Terms of Use. You can review the changes here.

Thank You For Not Discussing The Outside World 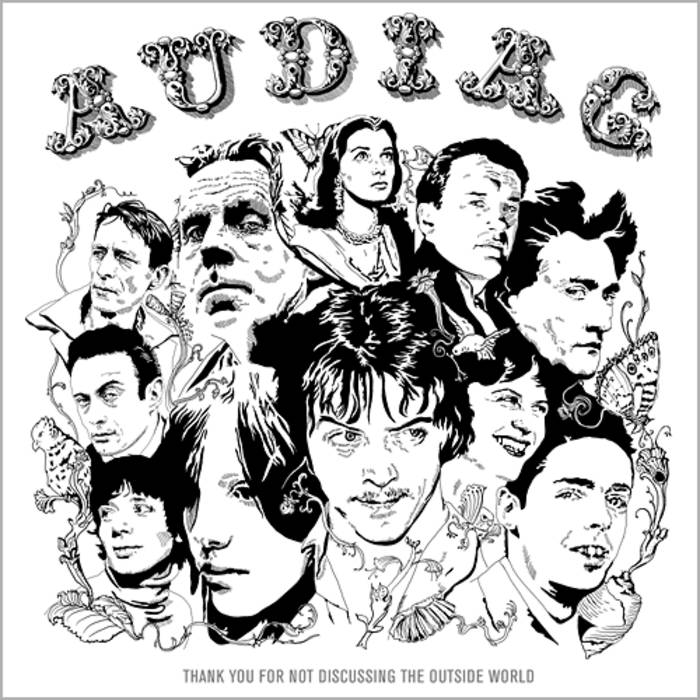 The music of Audiac is melancholic. At times, it is even bleak and despairing. "Oh" you might say, "what a way to introduce a record. Now why should I listen to such a drab thing?" Here is why: Because Audiac's music is still so full of beauty that no matter how barren your emotional life or how bleak the view from your window might be, it still makes you want to go on exploring life for "all its useless beauty" (a quote from one of their songs but also from someone else). After an energetic opener, Audiac come up with an absolute pearl of a song: SNEAKING gives you with that four o'clock- in- the- morning- and- I- am- the- only- living- being- in- this- world- feeling.

This music tells you in a very gentle way that loneliness and despair are part of human life. It makes you feel lonely and at the same time it lets you know you're in good company. Such is the power of Audiac's music.

It took the band almost four years to record this album. By the time of finishing it, they had crammed so many ideas into it, that the songs were on the verge of bursting. So they took the tapes to Hans-Joachim Irmler and asked him to produce them. In this process, almost half the ideas went out of the window of Irmler's Klangbad-Studio. The band themselves were at this point too much immersed in their work to have the necessary distance, so Irmler did the purging work on his own (working as a sonic reducer, you might say). A setup like this would be a horror-scenario to most bands. Yet Alex Wiemer, Singer and Bassist with Audiac, thinks that a composer has to be able to let go of his work, of the idea he has of a certain composition. And so he let go of SNEAKING and was very pleased with what his partner Niklas David, keyboarder and arranger, came up with. And then they were both happy with what Irmler made of it. All their channels are open, as Alex says.

This process has brought out what is really good about these songs. For example: On WHAT I AM TODAY their musical ideas were minimized to a maximum effect. That piano lick you can hear throughout the song is pure genius, and when it comes to stand alone at the end, you find yourself wishing it would go on forever, such is its inherent beauty.

Maybe this music will affect people on the inside because it was done in very hermetic way. All of the tracks to this album were recorded in a small room in Tübingen, Germany, by two old-time friends, who knew each other from school-days. This is not music for big halls or discotheques, it is for small rooms, stuffed with personal memorabilia or for car-rides through the rain. It is extremely personal and works best on a one-to-one-basis. Which is an explanation of its album's title.

Another interpretation of the title is that Audiac's music leaves out 99% of all other music that is currently around and clogging up our ears. This is in no way Rock of Pop, but something idiosyncratic (ok, all liner notes want to make you believe that), something with its roots more in a European music tradition. It has a lot in common with classical music and thus could be called a fine circum-navigation of the all rock-stereotypes. Given the musical output of today and Audiac's unwillingness to mix with that, their title comes as a sigh from the heart of anybody really into music: Thank you for not discussing the outside world.